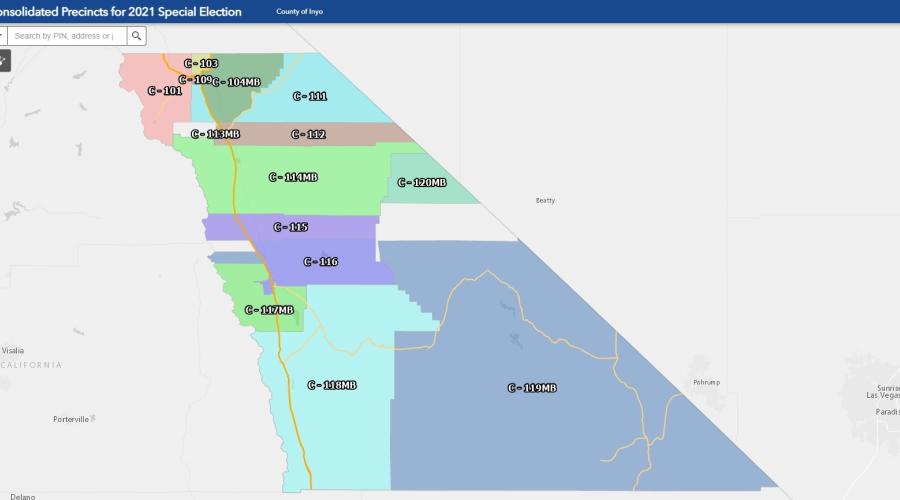 The National States Geographic Information Council (NSGIC) has used the Inyo County Office of Elections as a case study in improving election systems. The full CASE STUDY  is available on the NSGIC website.

Before Inyo County created GIS data for all its precincts and voters they faced a dilemma: there was no technical way to audit voter lists to ensure that voters had been placed in the correct voting precincts and districts and would be allowed to vote in the right races.

Luckily, the county already had a GIS database with a number of layers, including streets, parcels, supervisor districts, and township and range lines. Adding a layer for voting precincts could be accomplished in weeks, and this formed the basis for being able to audit voter data.

Today, the county compares the election management system’s (EMS) voter precinct assignment to a similar data set produced by their GIS system, in order to identify and correct discrepancies. This involves geocoding, or providing a known point-location for the physical residence of each voter. Those latitude-longitude combinations can then be spatially compared to other spatial objects, like a precinct, and lists of voters per precinct can be produced. With those lists in hand, along with the corresponding lists produced by the EMS, the county is ready to audit.

What they do next may be of interest to many other jurisdictions whose election management systems do not support GIS data. Inyo County staff use a software program to automatically audit the lists in three steps, prior to digging into and correcting any identified discrepancies.

The county uses a variety of geocoding sources for their addresses, several of which are detailed in the case study. One source they particularly recommend: the Census Bureau, which has a robust address dataset and an easy-to-use online geocoding application.

What are Inyo County’s wishes for the future? To have GIS be fully integrated within the election management system itself. Streamlining the functionality into one system would make for a more seamless process and require less technical acumen of election officials. It would also allow for data visualizations for candidates and campaigns, as well as displaying election results with correlated districts and geographic locations; finally, it could help ensure equitable representation during redistricting.