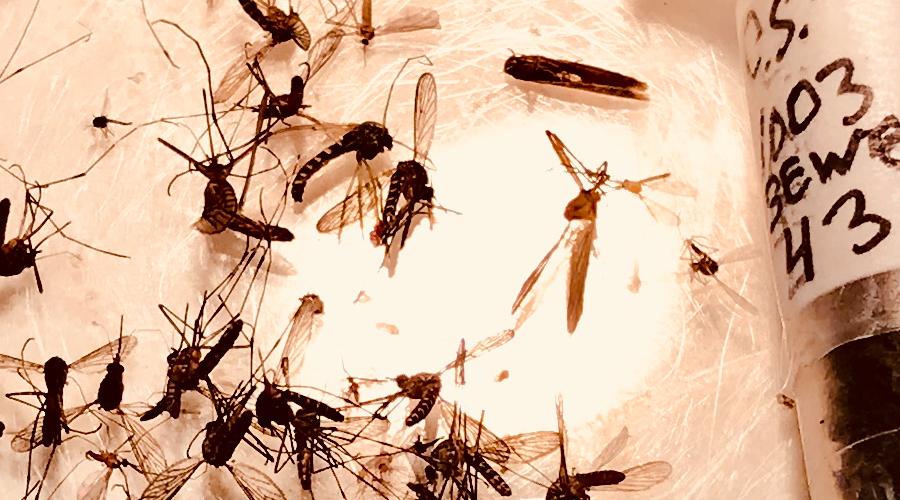 Mosquito control has a long history in the Owens Valley, with treatment records, at least on a small scale, going back to the 1950’s. There are several well written pages chronologically detailing the events of the winter of 1968/69, which was so severe in snow fall and the ensuing rapidity of melt-water runoff, that a state of emergency was declared for much of the Eastern Sierra. Funding previously unavailable without such a declaration was quickly put to use in the field with an aerial assault on breeding mosquitoes within the Owens River floodplain via helicopter application of organophosphate insecticides.

Abatement efforts continued on a small scale through the Inyo County Health Department until fiscal year 1979/80 when it was discontinued due to budget restrictions despite warnings from the County Health Officer at the time.

In 1981 there were more letters written on both state and local levels detailing the need for an organized mosquito abatement program to be developed or reestablished within the Owens Valley due to increasing concerns over mosquito-borne disease transmission.

The winter of 1982/83 is still the wettest on record, 2 times the long-term mean. In early 1983, because of the snow conditions, there was a collective cry from the citizens of the Owens Valley that, according to petitions signed at the time, sounded like this:

TO: The Board of Supervisors of the County of Inyo

“The following people, residents of ________________, California, want to request that you take steps now to begin a mosquito abatement program in Inyo County. The near-record amount of precipitation this winter will provide an abundant breeding ground for mosquitoes this spring and summer. Please take steps to provide some type of abatement program immediately to avoid the possibility of an epidemic of encephalitis, as well as to protect our tourist industry from the blight of mosquitoes, and to protect the health and well fare of the citizens of Inyo County.”

In March that year, monies were unanimously approved and appropriated by the board of supervisors to fund a new Mosquito Abatement Program including two new positions; one Mosquito Control Technician and part time clerical helper. These measures, funded through “Appropriations for Contingencies”, were the very beginnings of a formal abatement program in the Owens Valley.

It was quickly realized that, though the new Program was making progress in abatement, an additional and stable funding source would have to be garnered for the Program to have a measurable and lasting effect on mosquito populations. The answer to the funding problem was clear.

The November 7th, 1984 ballot included an advisory measure asking: “Should the Board of Supervisors establish a Mosquito Abatement District for the purpose of generating funds to support a Mosquito Control Program within the Owens Valley?” This advisory measure passed with 78% of those that voted, voting “Yes” paving the way for a new, fully funded Program.

On March 5th, 1985, the Inyo County Board of Supervisors voted unanimously for the creation of a mosquito abatement program that shall hereby by be designated as the “Owens Valley Mosquito Abatement Program” or the OVMAP.

OVMAP Mission Statement The mission of the OVMAP is “To enhance public health and comfort through providing safe, effective and economical mosquito control in the Owens Valley”.

To accomplish this, the OVMAP provides continual surveillance of mosquitoes to ascertain the threat of disease transmission and annoyance levels, then uses safe, integrated vector management methods to keep mosquitoes below those levels.

OVMAP Program Boundary Following is a boundary description of the OVMAP.